Marie’s eyes flitted open. The stiff cushions of the couch pressed into her back. The hardness of the armrest was causing the muscles of her neck to tighten into a cramp. The confines of a human body were immediately apparent as she rubbed the soreness from her neck.

The memory of the meadow raced to the front of her mind. She could still see the face of the young man. He was so surprised and confounded at the turn of events. Then there was his comment about the girl, Selena.

“Selena,” she tried the name out letting it roll off her tongue. It felt odd but she liked it. Could it be possible that she had just seen her own daughter? Even worse, could she have actually just watched her daughter murder someone? The sound of the young woman’s laughter echoed in her mind. She tried to remember her face. Brown curly hair framed delicate features. She couldn’t remember what color her eyes were. The whole notion of seeing your child who had not been born yet made her head swim. Nausea churned her insides.

She had to shake the thoughts from her mind. She jumped up from the couch and stretched, reaching high up to the ceiling. Allen would be back from class soon. She tried to play out the scene of telling him in her head. It had been so hard on him before. She had been in a coma for months and he had no idea why. He certainly didn’t know she had been fighting for her life with demons.

Allen had come a long way accepting her crazy stories. There was a time when he didn’t even believe in life after death. This would be another stretch for him. Images of marrying Allen one day, of cradling a baby girl in her arms with him at her side, floated in her mind. He had proposed but they still had another year of college in Sonora and then they were going to transfer to Humboldt University. It would be three years before they could get married. Even longer before they started a family.

“But yet,” she said to herself, “the woman looked to be an adult, the same age as me, and its only twenty years from now.” A thump from the bedroom knocked her out of her reverie. Startled, she held her breath and tiptoed into the kitchen and picked up a skillet off the stove. Dried bits of scrambled eggs fell to the floor as she held it up like a baseball bat.

She crept along the wall waiting for the door to open. All she could figure was that someone had broken in while she was asleep. She heard footsteps coming and braced herself, raisng the skillet even higher. Trying not to breath, the lack of oxygen was making her dizzy.

The door handle clicked and the door swung open. “Marie!” A man’s voice called out. Marie was beginning the descent on his head when she heard Allen’s voice and twisted her whole body to avoid clubbing him.

“Allen! What are you doing here? I thought you were in class.”

“I must have slept through the alarm. I don’t know. But, Marie! Oh, God. Marie.” He was panting like he was terrified.
“Allen, What’s wrong with you?” She asked, leaving the skillet on the table and reaching for him.

“It was just a dream! I’m okay,” she tried to calm him. She caressed his cheek.

“No! It was so real. I saw you in a meadow. A man was chasing you and,” he closed his eyes and held his fists against them, “he attacked you. But,” his mouth fell slack as his eyebrows pressed down, “but then it was like I was inside you and I could fight for you. I killed him. There was a knife and I,” he stuttered.

“Allen, what are you talking about?”

“It was just a dream. You’re safe.” He looked in her eyes and a hint of relief crept into his hysterical features. “Just a dream.”

Marie kept fitting the pieces together and coming up with an impossible scenario. Now she was the one having a hard time believing what she was hearing.

(Read the next chapter here.) 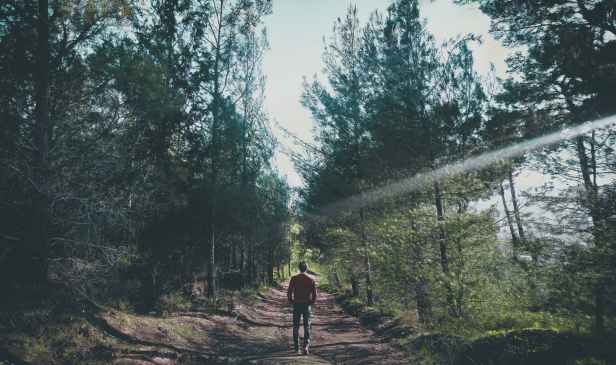