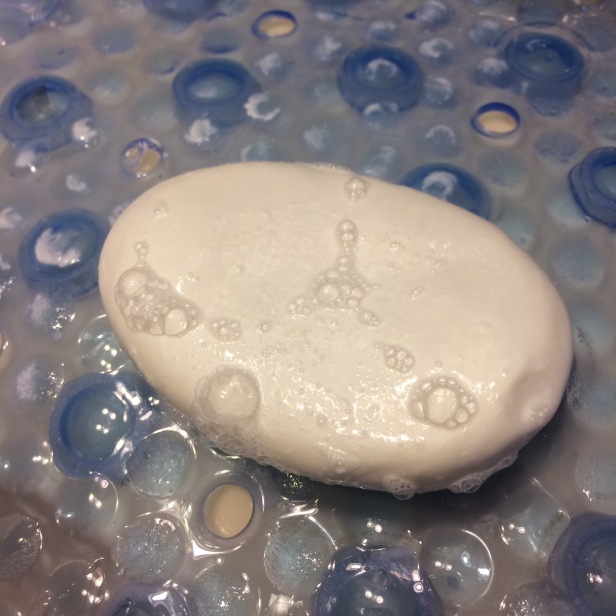 Nicole and I watched TV in my room. I have two chairs covered in a beige floral fabric and a TV on the wall. Nicole visits me often. I think she comes over every day, actually. She is alright. I can’t remember how I know her. At least she spends time at my place. That’s more than I can say for others.

The Bold & the Beautiful came on. Nicole really gets into it. I can’t understand what they say half the time. I just watch them. They aren’t like me. They wear make up and flashy clothes. Not that I would ever want to do that. They are just so different. Then that Steffi crawls all over guys. She’s a hussy.

Nicole laughed. “She is pretty assertive. Some guys like that though.”

I made a face and smirked. I began to wonder about Nicole as she sat there enthralled watched Steffi crawl up that man. “Like I said: If I ever!”

Quinn hit some woman over the head with a silver candlestick. Nicole jumped and gasped. I don’t know why, but it didn’t shock me. I had a notion that it should have shocked me. Sometimes I feel like I am in a box in my head watching things. Things I see are so removed from me when I’m in my box. I watch life like I’m watching television.

“Now what is she going to do? She is in big trouble. Can you believe she did that?” said Nicole.

“Some people are just like that. You have to be careful. My son’s wife is the devil. You have to watch her all the time.”

The Price is Right came on next. Someone was called down and she started rolling down the aisle on the ground. I can’t understand why people act like that.

“She’s stupid, you know that!” I said flatly.

The woman got up on stage and crawled around on her hands and knees between that game show host’s legs.

“She’s stupid.” It reminded me of Joe’s brother that would roll around on the church floor when he was “filled with the Spirit.” I always thought if I had to roll around like that to go to heaven, I’d never make it.

Nicole told me she was going to get my bath ready. I wasn’t really wanting to take a bath but I let her. She came back and told me it was ready and I went in the bathroom. I couldn’t find my clean clothes.

“Nicole, where are my clean clothes?” I yelled out.

“Here on your bed. You can change in your room. You don’t have to change in the bathroom.”

“I don’t want to change there.”

“Okay. Here you go.” She handed them to me. “The shampoo is there on the tub.” She pointed at it.

“Alright. If you don’t want to wash it now, I can wash it later, but its dirty, so it needs to be washed.”

She could have thrown a cup of cold water in my face and it would have felt the same. Who did she think she was telling me my hair was dirty. Pushy woman! “Now, Nicole! I going to tell you something: I don’t like people telling me what to do!”

“I know. I’m sorry. Wouldn’t you want me to tell you if you forgot?” She smiled at me which made me hate her more.

“This is your home. Here, I’ll close the door so you have privacy.”

I stood there fuming and not really knowing what to do next. The words I wanted to say to her wouldn’t pull together in my head. I took off my clothes and got in the bath. I grabbed the cup to wash my hair and smashed it into the water. It banged the bottom of the tub and splashed all over me. No one was going to tell me what to do! I don’t need someone telling me to take a bath. I’m not a child. My hair looked fine. I even brushed it this morning. I brushed it at the breakfast table.

I washed myself and got out. I put on my clean clothes and sat down by the TV. Nicole was there. Seeing Nicole reminded me of having to make my mother to take a bath when she was old. My sisters and I would take her clothes and put her in the bathroom and not let her get dressed until she took a bath. I think that was how the story went. It seems right. Was it my mother or my grandmother? I don’t know why I thought of that. I told Nicole about it.She just smiled.

“Mother would act just like a child and refused to bathe.”

The View came on. The host with a really big hair do was talking. Her hair looked crazy.

“Would you look at her hair? She looks stupid!” I couldn’t believe anyone would go around looking like that.

Nicole laughed with me. Something about hair bothered me but I couldn’t remember what it was. I reached up to check my hair pin. My hair felt soft and clean. Nice. I’m so glad I took a bath. I don’t need anyone to tell me what to do.